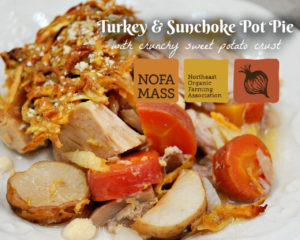 I was first introduced to sunchokes by accident.  Well, actually, it was more a matter of them being thrust on me than a gentle discovery.  In the early days of my local food crush, I saw an ad for someone selling horseradish root from their backyard garden.  Being new to gardening and having a few empty beds to fill, I made the hour drive to pick some up.

When I arrived at the suburban neighborhood, I was surprised to see a man standing in his driveway, digging along his white picket fence, dividing tubers in the two-foot section of soil between pavement and plastic.  He waved me in, greeted me with a gritty grip, and handed me a box of horseradish.  As I stood there making small talk with him, I was in awe of how much food he was growing in his tiny lot and how much joy he seemed to take in gardening.  His neighbors clearly did not share the same interest; their landscaped lawns trimmed short and lined with annuals blooms.

But the plot was not only productive, it was truly beautiful.  Tall yellow flowers shaded the place we were standing and created an extra layer of privacy between his house and the next.  I asked about these plants, guessing they were a type of sunflower meant for decoration only.  It was then that the man pointed to the basket of tubers he had been collecting from the ground beneath these towering blossoms. 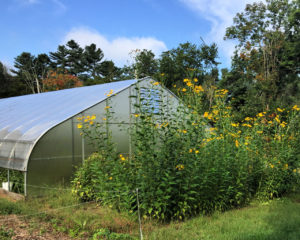 “Every had a Jerusalem artichoke?” he asked.  I hadn’t.  And these didn’t look anything like the artichokes I had seen in the store.  “Here, take some!  I have more than I know what to do with and nobody else in my family eats them.”

“Should I plant them or eat them?” I wondered.

“Both- plenty there to have a taste and save some too.”  He handed me the basket and turned away to continue his work. 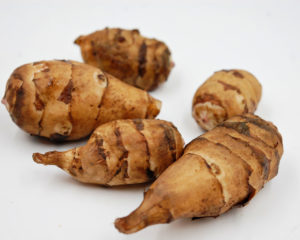 Sunchokes are a thin-skinned tuber with a nutty taste and crisp texture.

And with that, I was the bewildered new owner of 5 lbs. of Jerusalem artichokes (also known as sunchokes) that I had no clue how to handle.  The planting story is one to tell for another day, but after a bit of research, I discovered that preparing them for eating can be a bit tricky too.  You see, sunchokes have another charming nickname that the man neglected to tell me.  Fartichokes.

As it turns out, sunchokes have a high amount of a polysaccharide called “inulin” in them.  Inulin has actually gained some popularity as a prebiotic supplement to improve gut health.  Read more about the health benefits of inulin here.  But the problem with it is that the human body cannot digest inulin, and when eaten in large amounts, the bacteria in the lower intestine breaks it down, producing methane in the process.  Resulting in an uncomfortable and embarrassing side effect.

Not to worry, dear friends, there is a solution.  Just boil your sunchokes in an acid solution (like lemon juice or vinegar) to break down the inulin into digestible fructose and glucose.  No more school yard name calling for these underappreciated roots.  And then you can use them as a replacement for starchy potatoes in this tasty comfort food favorite. 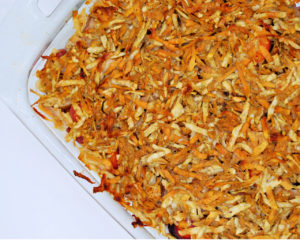 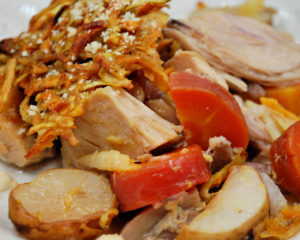 Eat fresh out of the oven to enjoy this crispy texture and moist gravy.

Dandelion Greens with Jerusalem Artichoke for the Microbiome